The All Star Youth Tennis Scholarship Trust (All Star Tennis Trust or ASYTST) is a local, volunteer run, child focused charity through which the trustees believe that tennis can change lives.

Beneficial impact of tennis as a sport for children

The Trust focuses on our core aim of financially helping children without the parental means to achieve the best use of their talent for tennis through performance coaching or our development programs.

Funded through the volunteer efforts of the trustees and the backing of local community minded supporters in Wandsworth.

All funds raised are spent on the children we support as we operate with no running costs.

Support the All Star Trust

ASYTST awards grants to young people who have shown promise and dedication to tennis in the Wandsworth community.

We would be very grateful for direct contributions to the Trust from friends and fellow players. The Trust has been approved for Gift Aid Status with Her Majesty’s Revenue and Customs which will be applicable to all donations provided a gift aid declaration has been obtained from the donor.

It is intended that the Trust will benefit many young people connected to the borough of Wandsworth showing significant promise in their ability to play tennis without sufficient parental financial means to take it to a higher level without the help of the Trust. The Trust is currently focusing on high performance training sessions with leading coaches for our most promising prospects. The trustees are concentrating our resources on the coaching and development of children that we have identified as being particularly suitable to be beneficiaries of the Trust. All these children have shown high levels of ability and a strong desire to be champions. Their enthusiasm for additional high performance coaching and development funded by the Trust, that would be difficult for their parents to afford without our help, has endorsed our commitment.

The All Star Youth Tennis Scholarship Trust has for some years managed a Schools Outreach and Development Program for local school children in Wandsworth together with the backing of Thomas’s Foundation. The support of the Trust has been instrumental in enabling free taster sessions and talent identification to take place and given the potential for talented children to be fed into the development community squad sessions run by All Star Tennis across the Borough. The squad sessions have continued year round and thus also been played in the cold and fading light but still for the love of tennis. This program has allowed the All Star Youth Tennis Scholarship Trust to support children at the grass roots level and help identify potential stars of tomorrow.

In 2015, the All Star Youth Tennis Scholarship Trust initiated a pilot project with Swaffield School that ran for the summer term. The Trust contributes to half of the cost of the tennis coaching sessions (coach fee) and the school pays the other half. The program is focused on children that could not afford to attend after schools clubs and is held at breakfast time. Feedback from the school was that it was a tremendous success and they were delighted with how the first term went. The project was so successful that a further session was added in 2016 and the Trust has worked with the Swaffield School ever since and it has been clear the benefits to the children involved are much wider than just the tennis sessions.  The trustees have sought to replicate this model into other appropriate schools within the community.

The trustees of the ASYTST aims to safeguard children in its care.

The All Star Youth Tennis Scholarship Trust is a registered charity that was set-up in 2007 to further the development of kids from the borough of Wandsworth showing significant promise in their ability to play tennis without sufficient parental financial means to take it to a higher level. The inspiration behind the All Star Tennis Trust was Sebastian Wray who had dedicated himself to the sport of tennis and the Wandsworth Tennis Centre from the age of 11 and whom the coaches, Ben Jackson and Ben White at All Star Tennis, felt could benefit from a higher level of training and development which would ultimately be an advantage to the wider tennis community in Wandsworth. In 2008, Sebastian became the first beneficiary of the Trust and was given a grant to study at a Spanish Tennis Academy. Sebastian has subsequently gone on to become a successful full-time tennis coach at a local tennis club and put back into the Trust by coaching a regular weekly session in the past.

It is intended that the Trust will benefit many young people in Wandsworth who are dedicated to the sport of tennis and have shown the same exceptional commitment as Sebastian. Although the funds at the Trust’s disposal are relatively modest, the aspirations of the trustees for wanting to make a difference are high. The Trust has been funded by a combination of individual gifts, sponsored events and annual fund raising days and is administered by four local trustees, Sean Molony, Ben White, Ben Jackson and Peter Brimelow. The trustees involved with the Trust continue to contribute their services and knowledge voluntarily to maximise the amounts that can be given as grants.

Want to raise money for the All Star Youth Tennis Scholarship Trust?

We have more demand for grants than we have had available funds. In the past, we have had 3-Peaks walkers and half marathon, marathon and 100k challenge event runners. If you would like to do any activity for us, please contact the Chairman of the Trust, Sean Molony

Find out how to access your account and what's new - including details about your new booking system and app. 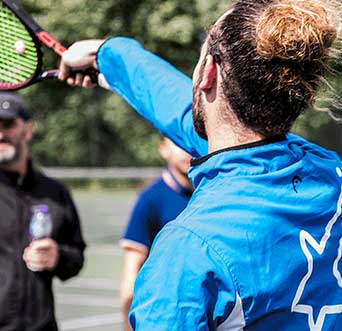